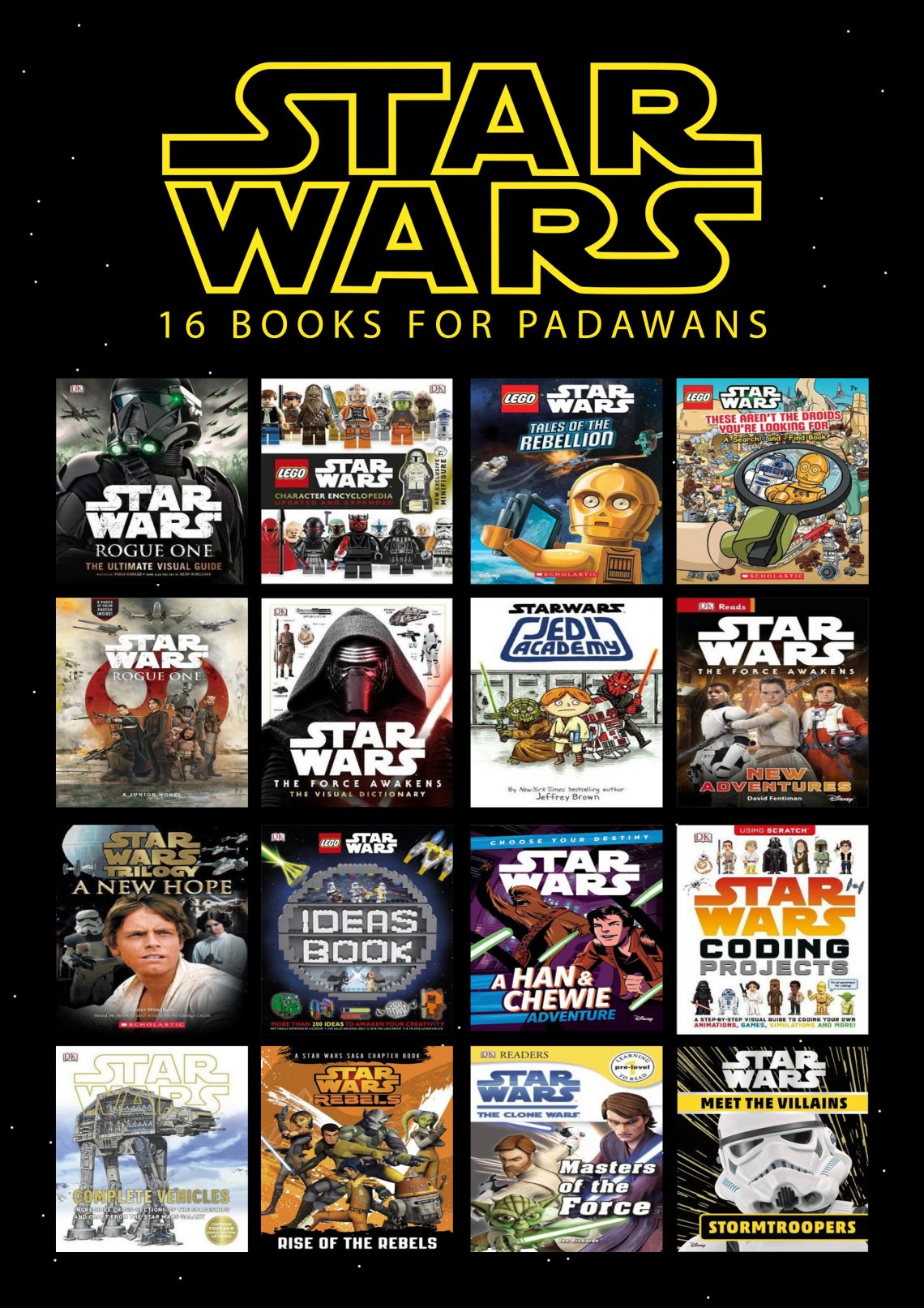 As today is May the 4th, I thought I might join in the Star Wars fun and take a look at some of the Star Wars books I have in my Junior School Library. Star Wars books are always extremely popular and are almost always out on loan. Below are some of the student’s favourites. In this selection you will see Non Fiction and Fiction books with something for everyone, both younger and older children and everyone in between.

The complete guide to the spacecraft and vehicles of the Star Wars six-film saga. It features 55 giant cross-section pictures and hundreds of smaller pieces of artwork and photographs that highlight engine details, weapons and lots more. Discover four brand new cross-sections inside, as well as sneak-peek looks at how the artists create these amazing pictures.See the incredible detail in craft flown by Republic, Separatist, Imperial and Rebel pilots. Hop onboard a Naboo Starfighter, explore the famous Milennium Falcon, and hitch a ride on a Coruscant Taxi. There are podracers, droids, Imperial shuttles, B-Wing fighters and of course, the Death Star.

My son Max absolutely loves this book! He loves looking at all the details, and there are so many details to look at, you might even find some of your favourite characters in their iconic vehicles. A book to keep Star Wars fans engaged for hours.

The complete guide to Star Wars: The Force Awakens, this visual dictionary reveals all of the characters, creatures, droids, locations and technology.

The above two visual guides by Pablo Hidalgo rarely hit the library shelves. They include some truly spectacular images, and provide Star Wars fans with lots of awesome facts about their favourite characters, vehicles, weapons and locations from the films.

LEGO Star Wars Ideas Book features imaginative play and building ideas using your own LEGO brick collection, from LEGO projects that take just a few minutes, to builds to keep you occupied for hours. Set up a game of LEGO Star Wars skittles, create a pencil pot shaped like your favourite Sith or Jedi, build a fleet of tiny TIEs, design Darth Vader’s family tree, and customise a podracer. Challenge a friend to take on a rathtar, mix up your minifigures, stage your favourite movie battle scene with LEGO Star Wars bricks – and much, much more!

This book combines the best of two worlds, Star Wars and LEGO. The builds inside are very impressive and lots of fun, if only you have all the pieces in your collection. A great boredom buster!

What are stormtroopers? How many types are there? Who do they work for? Perfect for children who are new to Star Wars and also for young fans of the movies, this exciting guide will answer these questions and many more and teach children fun facts about stormtroopers – including following Finn’s incredible journey from First Order stormtrooper to Resistance hero!

There are another three books in this cool little series. Full of lots of fun facts about your favourite villians or heroes. This series also includes Darth Vadar, Chewbacca and R2-D2. Perfect younger Star Wars fans!

Dark forces are gathering. A new battle is beginning. Meet the brave heroes who will try to defend the galaxy. Read about the villains who want to rule it. Learn about amazing starships and find out about an epic battle between good and evil.

Another great book for younger Star Wars fans, with lots of awesome facts from the most recent Star Wars films.

LEGO Star Wars: These Aren’t the Droids You’re Looking For. A Search and Find book

The evil droid IG-88 is wandering all over the LEGO Star Wars universe trying to spy on the good guys, and it’s up to you to find him! This search-and-find book is filled with all your favorite heroes and villains from across the galaxy. After you’ve helped Yoda find IG-88, there’re still tons of other fun things to look for. Are you ready?

With a title like that, how can you say no to this book… Search and find books are always tons of fun and are a winner in my library every time. If you love this book, keep an eye out for Where’s the Wookie: A Search and Find Activity Book.

Star Wars Coding Projects is a step-by-step visual guide to coding fun projects in Scratch and shows you everything you need to know to create cool computer projects, animations, and games. Create your own sprites and use them in your projects. Build your own characters, navigate a spaceship through an asteroid belt, and go on a jetpack adventure. Learn essential coding skills, share your projects with friends, and challenge them to beat your scores.

This book is a fantastic guide for kids who love to code, who wouldn’t love to create their own Star Wars game!

LEGO Star Wars: Tales of the Rebellion by Ace Landers

As a protocol droid I prefer to stay out of trouble. Easier said than done. My friends are always getting themselves involved in rebel missions, and I’m usually taken along for the ride. Read about our adventures in these three short stories; Catch that Jedi, Operation: Later Vader, A Most Dangerous Droid.

LEGO Star Wars books are great choices for younger readers. They are nice and simple to read and complemented by bright colourful illustrations.

Star Wars: The Clone Wars – Masters of the Force by Jon Richards

Get your child hooked on reading as they meet some of the amazing creatures from the Star Wars Clone Wars series. Meet the Jedi and the Sith, and learn about their amazing powers as true Masters of the Force.

Another great series for younger readers, with full colour illustrations. Based on the Star Wars Clone Wars television series, young fans of the series will love these books!

Jump inside the Millennium Falcon and help Han and Chewie as they journey across the galaxy on a simple smuggling job. But nothing is ever simple with Han Solo, and when things go wrong, Han pretends to be Jabba the Hutt to save himself, Chewie and the Millennium Falcon. And that’s when things go from bad to worse! With more than twenty possible outcomes, readers will have to think like a true smuggler to keep Han and Chewie safe from Imperial TIE fighters, Mandalorian mercenaries and so much more! With so many different story paths, the adventures never end!

A Han & Chewie Adventure is a new addition to our library, but with the combination of Star Wars and Choose your Destiny you can’t go wrong!

Roan’s dream is to leave home and attend Pilot Academy. But just as Roan is mysteriously denied entrance to Pilot School, he is invited to attend Jedi Academy — a school that he didn’t apply to and only recruits children when they are just a few years old. That is, until now… In Roan’s first year at Jedi Academy, under the tutelage of Master Yoda, he learns that he possesses more strength and potential than he could have ever dreamed. Oh, and he learns other important things too — like how to make a baking soda volcano, fence with a lightsaber, slow dance with a girl and lift boulders with the Force.

Jedi Academy is a very popular series in my library and even though I have listed Jeffrey Brown as the author, books in the series are written by a variety of authors. For those kids who love humorous, laugh-out-loud stories this is the series for them. With comic book style illustrations throughout, fans of Diary of a Wimpy Kid, will love this series.

Star Wars Rebels: Rise of the Rebels by Michael Kogge

Your favourite Star Wars Rebels heroes are ready to fight the evil Empire! Kanan, Hera and trusty old Chopper battle TIE fighters while Sabine uses her artistic talents to outsmart Stormtroopers. Zeb never misses an opportunity to take down troopers, and Ezra scores a special souvenir at the crash site of an Imperial fighter.

If your kids love the Star Wars Rebels television series, they will love these books. This series is suited to ages 8 – 12.

Young farm boy Luke Skywalker is thrust into a galaxy of adventure when he intercepts a distress call from the captive Princess Leia. The event launches him on a daring mission to rescue her from the clutches of Darth Vader and the Evil Empire. Join their mission in this movie novelisation.

The movie novelisations of each episode of the Star Wars franchise are popular choices for older readers, ages 10+.

The Rebel Alliance has learned of the existence of a terrifying Imperial weapon, capable of destroying entire planets: The Death Star. The fate of the galaxy rests on the courageous young woman Jyn Erso and her band of unlikely companions as they race to steal the plans to the Death Star before time runs out.

Star Wars: Rogue One is another movie novelisation that is suited to older readers ages 10+. 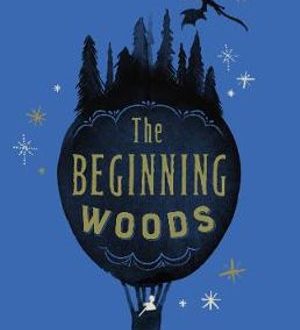 The Beginning Woods by Malcolm McNeil 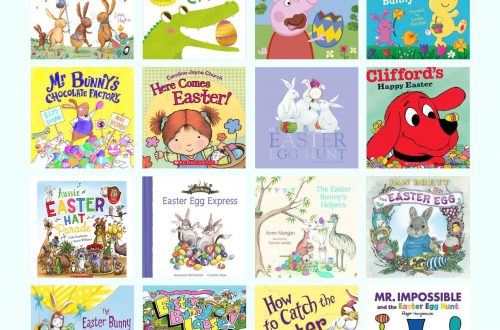 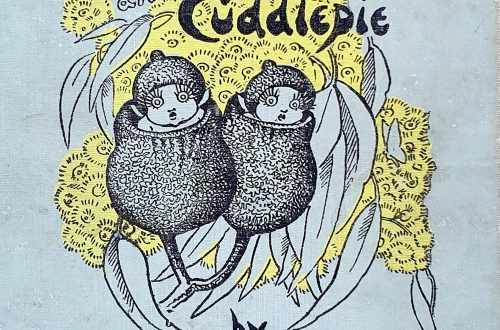